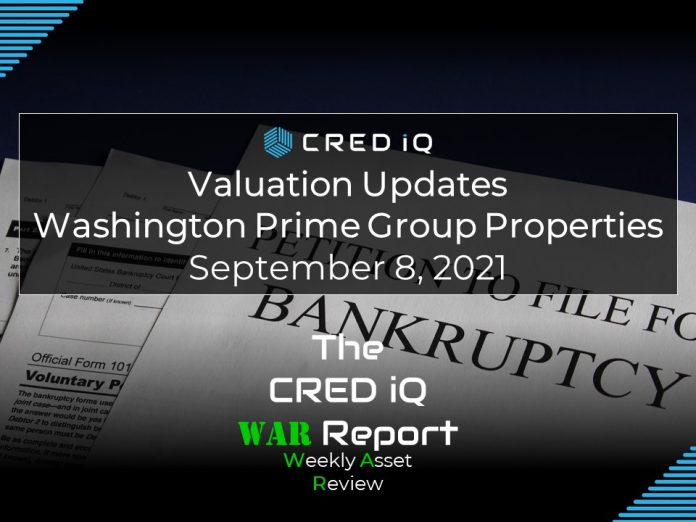 This week, CRED iQ calculated real-time valuations for 5 retail properties that are owned by Washington Prime Group (WPG), which declared bankruptcy on June 13, 2021. WPG made headlines late last week just before the beginning of Labor Day weekend when the shopping center REIT emerged from bankruptcy. A large part of the bankruptcy proceedings centered around the valuation of WPG’s assets, including its portfolio of over 100 retail properties. Many of WPG’s retail properties are encumbered by first lien mortgages that have been securitized in CMBS, including Dayton Mall and Brunswick Square, which were last featured in the August 3rd WAR Report. This week’s updated valuations aim to provide guidance for WPG properties with the highest amounts of outstanding mortgage debt.

CRED iQ valuations factor in a base-case (Most Likely), a downside (significant loss of tenants), and dark scenarios (100% vacant). For full access to the valuation reports as well as full CMBS loan reporting, including detailed financials, updated tenant information, and borrower contact information, sign up for a free trial here.

This $225.0 million loan ($130.4 million in senior debt and $94.6 million in subordinate debt) is secured by a combination of fee and leasehold interests in a super-regional mall complex located 9 miles outside of Honolulu, HI. Pearlridge Center is one of WPG’s most valuable properties, consisting of multiple phases. The Uptown portion of the property is anchored by Macy’s, TJ Maxx and Ross Dress for Less. The Downtown portion of the property was formerly anchored by a Sears, which is now vacant, and features a CVS as well as a movie theater. There is also an office portion of the property that consists of an 8-story building. Overall occupancy at the property remained stable at 91% throughout 2020 despite adverse impacts from the pandemic. The loan appeared on the master servicer’s watchlist during 2020 and 2021, citing the potential need for COVID-19 relief; however, the loan remained current in payment. Pearlridge Center was even able to avoid special servicing during WPG’s bankruptcy proceedings. Still, the pandemic has taken a toll on financial performance. NCF for 2020 was $19.7 million, which was a 13% decline from the prior year. The mortgage loan is scheduled to mature in June 2025. For the full valuation report and loan-level details, click here.

This $174.0 loan transferred to special servicing on March 31, 2021, which was before WPG’s bankruptcy filing. The transfer reason was cited as imminent non-monetary default and was likely affiliated with the impending bankruptcy. A forbearance agreement was signed in May 2021 that would grant WPG temporary relief from KeyBank, as special servicer, pursuing any rights and remedies related to the non-monetary default.

Waterford Lakes Town Center is one of WPG’s better positioned relative to its whole portfolio with its power center layout and location. The open-air retail center is located in Orlando, FL and is anchored by a Super Target, which does not serve as collateral for the mortgage loan. Updated servicer commentary stated the property was 96% occupied, although we anticipate elevated lease rollover risk prior to loan maturity in May 2029. The 5 largest tenants – Regal Cinemas, Best Buy, JOANN Fabrics, Bed Bath & Beyond, and Ross Dress for Less – all have lease expirations prior to loan maturity. All of these tenants, except for Bed Bath & Beyond, have a 5-year extension option. Four out of the 5-largest tenants have go-dark provisions in their lease agreements, which was a cause for concern during the early stages of the pandemic and remains a peripheral risk through loan maturity. For the full valuation report and loan-level details, click here.

This $165.0 million loan ($95.0 million in senior debt and $70.0 million in subordinate debt) transferred to special servicing on March 22, 2021. Similar to Waterford Lakes Town Center, the transfer was affiliated with WPG’s eventual bankruptcy filing in June 2021. KeyBank, as special servicer, indicated that it would not enforce an event of default related to WPG’s bankruptcy. As part of that agreement, cash management provisions were put in place, but such provisions may be lifted now that WPG has exited bankruptcy.

The loan is secured by a mixed-use lifestyle center located in Scottsdale, AZ comprising of 66% retail and 33% office space. Primary retail tenants include Apple and Restoration Hardware. Primary office tenants include Starwood Hotels, Spaces – a coworking Regus affiliate, and Maracay Homes. WPG recently announced a positive leasing development for the retail portion of the property, stating that a lease has been signed with Landmark Theatres, which will backfill the vacant movie theater space that was formerly occupied by iPic Theaters. Notable retail tenants that have vacated since loan origination include H&M and Nike, which accounted for an aggregate 8% of the property’s GLA. CRED iQ estimates occupancy of 87% following the new lease with Landmark Theaters. For the full valuation report and loan-level details, click here.

This $91.8 million loan transferred to special servicing on June 17, 2021 due to WPG’s bankruptcy. Unlike the previous 3 properties discussed, Cottonwood Mall is a weaker asset within WPG’s portfolio and the REIT classified the mall as a non-core asset. Updated commentary for the loan indicated WPG requested for a deed-in-lieu of foreclosure agreement with Midland Loan Services, the special servicer. Following receivership and a transfer of title, the mall would then need to be liquidated. The mortgage loan was over 90 days delinquent.

This $74.1 million loan is secured by 771,844 sf of a regional mall located in Orange County, CA. Westminster Mall features 4 anchor pads – Macy’s, a vacant former Sears, Target, and JCPenney. Macy’s and the vacant Sears space do not serve as collateral for the loan while Target and JCPenney own their improvements and operate pursuant to a ground lease with WPG. The mall was reported to be 88% occupied; however NCF declined sharply in 2020. The Westminster Mall generated NCF of $4.7 million during 2020, which was a 51% decline compared to origination. Despite cash flow issues, the property has a desirable location in Orange County with redevelopment potential and underlying land value.

The loan has not yet transferred to special servicer despite a below breakeven DSCR during 2020. A favorable tax appeal ruling could have potential to alleviate potential debt service coverage issues; however, the decline in NCF remains a major concern. The loan has been on the servicer’s watchlist since December 2019. For the full valuation report and loan-level details, click here.

CRED iQ is a commercial real estate data, analytics, and valuation platform providing actionable intelligence to CRE and capital markets investors. Subscribers to CRED iQ use the platform to identify valuable leads for leasing, lending, refinancing, distressed debt, and acquisition opportunities. For full access to our loan database and valuation platform, sign up for a free trial below: