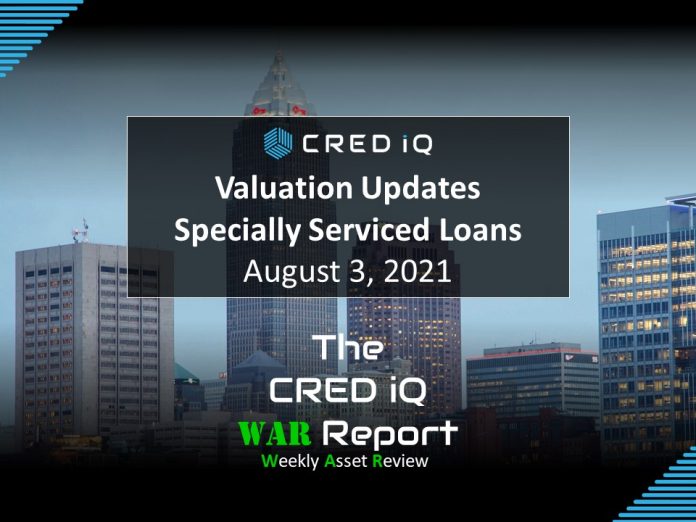 This week, CRED iQ calculated real-time valuations for 5 distressed properties that have recently transferred to special servicing, including two regional malls and a CBD office building in Cleveland, OH. For those interested in the affordable housing sector for multifamily properties, we highlighted two assets making negative headlines in suburban Indianapolis for neglect and mismanagement. The CRED iQ valuations factor in a base-case (Most Likely), a downside (significant loss of tenants), and dark scenarios (100% vacant). For full access to the valuation reports as well as full CMBS loan reporting, including detailed financials, updated tenant information, and borrower contact information, sign up for a free trial here.

This $76.9 million loan transferred to special servicing on June 30, 2021 with non-monetary default cited as the reason. However, the transfer to special servicing was likely prompted by the June 13, 2021 bankruptcy of the borrower sponsor, Washington Prime Group. Prior to the owner’s bankruptcy, the mall’s occupancy and NCF had been declining significantly. Washington Prime Group identified the Dayton Mall as a highly levered asset on March 31, 2021 and re-classified the mall as a non-core part of its portfolio, making it a candidate for a discounted payoff or deed-in-lieu of foreclosure agreement.

The mall features two vacant anchor pads, consisting of a 203,548-sf former Elder-Beerman and a 185,790-sf former Sears, as well as two operational anchors, consisting of a 268,943-sf Macy’s and a 178,686-sf JCPenney. Only the JCPenney anchor pad is collateral for the mortgage loan. NCF for 2020 totaled $4.5 million with a DSCR of 0.90, and we don’t expect performance to materially improve in 2021. Midland Loan Services, as special servicer, has not commented on a workout strategy as Washington Prime Group’s bankruptcy proceedings will need to be resolved first. For the full valuation report and loan-level details, click here.

This $67.3 million loan transferred to special servicing on June 29, 2021 due to imminent monetary default at the borrower’s request. This marks the second transfer to special servicing within the past year as the loan last returned to the master servicer in December 2020 without any modifications. The loan is secured by 292,685 sf of in-line space at the Brunswick Square Mall. The mall is anchored by Macy’s and JCPenney but both tenants own their parcels and improvements.

Brunswick Square shares the same borrower sponsor as the Dayton Mall, discussed above, and similarly has been identified as a highly levered asset and non-core property. Rialto, as special servicer, is evaluating workout options which may revisit modification proposals. The in-line space collateral was 88% occupied as of December 2020 and has steadily declined from 99% occupancy at origination in 2014. For the full valuation report and loan-level details, click here.

This $48.0 million loan transferred to special servicing on June 28, 2021, due to delinquency. The loan is secured by a 22-story office tower located in the CBD of Cleveland, OH. The office building was 87% occupied as of March 2021 but was further impacted by the recent departure of its third-largest tenant, law firm Littler Mendelson. Littler Mendelson vacated 44,667 sf of space, accounting for 8% of GLA, at lease expiration in April 2021 in favor of Key Tower, which overlooks Cleveland Public Square. CRED iQ’s estimated occupancy for the property is 79%. The loan has been paid through April 6, 2021 and is over 60 days delinquent. LNR, as special servicer, has not commented on a workout solution for the loan. For the full valuation report and loan-level details, click here.

This $32.0 million loan transferred to special servicing on June 29, 2021 due to imminent non-monetary default. The loan is secured by two multifamily properties with affordable housing restrictions that are located in suburban Indianapolis. According to an article from Fox59 News out of Indianapolis, the transfer to special servicing may be related to a lawsuit filed by the Indiana Attorney General’s Office against the borrower, which has a non-profit 501(c)(3) classification. The borrower’s non-profit status allows it to maintain an expemption from paying property taxes; although the exemption was recently revoked due to the issues outlined in the lawsuit.

The lawsuit alleges mismanagement and failure to maintain healthy living conditions for the properties’ residents. The Attorney General has requested a receiver be appointed to both properties. As recently as two weeks ago, the Lake Pointe at Nora property was damaged in a major fire that impacted the main leasing office and clubhouse and prior fires at the properties have resulted in downed units. Other items of concern included severe deferred maintenance, $1.2 million in outstanding water and sewer bills, mold, and broken fixtures throughout the premises. Aggregate NCF for both properties during 2020 was $1.2 million, which resulted in a DSCR of 0.61; however, property taxes were not included in those figures and could potentially total over $400,000. For the full valuation report and loan-level details, click here for Lakeside Pointe At Nora and here for Fox Club Apartments.

This $23.8 million loan transferred to special servicing on June 29, 2021 due to imminent monetary default at the borrower’s request. The loan is secured by a power center located in the Scranton–Wilkes-Barre MSA and the borrowing entity is encumbered by $2.0 million in mezzanine debt, which was held by Ladder Capital at origination. The property is anchored by a Lowe’s Home Improvement and a Price Chopper. Lowe’s owns its improvements and operates via a ground lease that expires in January 2027. Occupancy at the property was last reported to be 71% as of September 2020. Full-year financial statements were not reported for 2020 but the loan had a below breakeven DSCR in 2019 and 2018. Rialto, as special servicer, is in the process of initiating communication with the borrower. For the full valuation report and loan-level details, click here.

CRED iQ is a commercial real estate data, analytics, and valuation platform providing actionable intelligence to CRE and capital markets investors. Subscribers to CRED iQ use the platform to identify valuable leads for leasing, lending, refinancing, distressed debt, and acquisition opportunities. For full access to our loan database and valuation platform, sign up for a free trial below: